BC Christian News on the CASJAVA Achievement Award 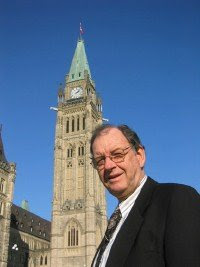 By Lloyd Mackey
IF THERE is a source of influence for faith-based social conservatives, it could well be found in a law office on West Broadway in Vancouver.

That is where K-John Cheung practices law half of his working day. The other half is spent leading the Canadian Alliance for Social Justice and Family Values Association (CASJAFVA).
Cheung is slight, energetic, friendly and clearly in charge. At CASJAFVA's annual fundraiser banquet this past Sunday night (September 23), he told the restive crowd that if they did not stop talking and listen, there would be no food. He was smiling as he spoke, but the slight edge to his voice showed that if the noise continued, he might just lose his patience. And no one who had plunked down $38 for a ticket to this evening was about to risk giving up on this 12-course dinner.
Edna and I had occasion to attend the gala event, which draws around 1,000 each year to Floata, arguably Canada's largest Chinese restaurant. As it happens, the member of parliament for whom she works as administrative assistant, Maurice Vellacott, was this year's guest speaker. (Previous speakers at this event have included veteran Conservative MPs Art Hanger and Jason Kenney, as well as Stephen Harper, when he was opposition leader.)
Vellacott needed some organizational help in Vancouver, thus Edna's reason to be there. And, in turn, she -- out of her own pocket -- found me a reasonably-priced airline ticket, so I could tag along.

As a result, OttawaWatch readers will get a glimpse, this week, at one example of the social virility of many of the Christian-based Chinese communities in Canada.
* * * 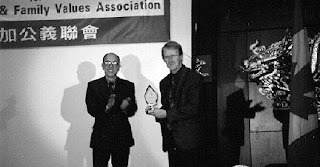 CASJAFVA reflects the activist socially-conservative part of the Chinese community in BC.
The group carefully selects a range of issues on which they can become involved. Their annual fundraiser contributes to the costs of research and advocacy, as they take an issue forward.
The Floata event was, as it was supposed to be, fun. After all, not only the Lord, but the leaders of advocacy groups, love cheerful givers. The more cheer, the better the dollars roll in.
But there were three points in the evening when a serious message was being communicated.
The first was what the theme speaker communicated. Vellacott delivered an inspirational, non-controversial homily -- a personal witness, if you like -- about his upbringing, preparation for service and the influences that these factors had on the way in which he functions as a member of parliament. He drew on his parents' influence, his own faith journey, his education (he has an earned doctorate in ministry from Trinity Evangelical Divinity School), the growth and development of his own family and his experience both as a pastor and a community health board member in Saskatoon(...) 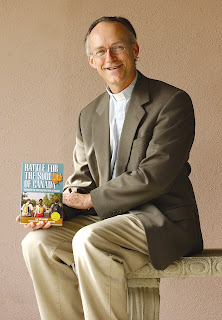 At the same time, however, he was prepared to recognize the achievements of other groups and encourage them to keep working away at their goals.
The recipients of the CASJAFVA 2007 achievement award were Dr. Vellacott, Tristan Emmanuel (a Christian polemicist who leads Equipping Christians for the Public Square) and Edward Hird, an award-winning author and Anglican priest who has been active in the struggle against the use of same-sex blessings in that communion.
* * *
Lloyd Mackey is a member of the Canadian Parliamentary Press Gallery in Ottawa and author of Stephen Harper: The Case for Collaborative Governance (ECW Press, 2006). He can be reached at lmackey@canadianchristianity.com.
September 27/2007
p.s. In order to obtain a copy of the book 'Battle for the Soul of Canada', or any of our six books in paperback or ebook on Amazon, just click on this link.