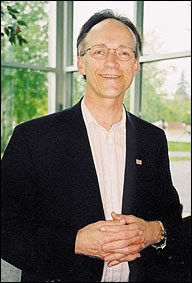 Ed Hird is an Anglican minister with a tenacious desire to communicate biblical truth. His North Vancouver congregation has been deeply involved in the struggle against 'the deadening effects of liberalism' within the broader Anglican community.

"Our land of Canada is in a severe leadership crisis, especially in the churches. As goes the churches, goes the soul of the nation.", he says.

But that burden for souls and for the realpolitik of the church life have combined to convince Hird that "Christian values lie at the heart of our nation and that the key to renewing the soul of Canada -the heart of this book - is to be found in raising up Timothys, raising up the emerging generation of leaders."

What follows is a collection of observations, testimonials, comments, anecdotes, historic vignettes, exhortations and ideas structured around the teachings of Paul in the two letters he wrote to his young understudy, Timothy.

"Paul and Timothy have so much to teach us if we are willing to listen. I believe that the task of raising up Timothys is the key to restoring our beloved nation of Canada," says Hird.

"So too we in Canada are being challenged to raise up a whole new generation of leaders, like Timothy, who are willing to stand up for truth and love our nation back to health."
Photo by Sue Careless