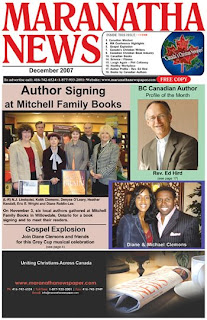 “Courage” and “conviction” are words that come to mind when thinking of the Rev. Ed Hird. He is a strong voice for God in Canada.

The Rev. Canon Dr. Michael Green, former Advisor for Evangelism to the Archbishops of Canterbury and York, said of Ed Hird’s ministry and award-winning book, Battle for the Soul of Canada, “Churches rot away when good men keep silent.” Keeping silent is not a fault Ed Hird can be accused of.

Battle for the Soul of Canada is a gift for this generation of Canadians. It tells the story of nine Canadian pioneers. The birth of the book was a long process, and was assisted by a fleet of godly men who spoke prophetically into Ed’s life, releasing him to write. Ron Dart, an instructor at the University College of the Fraser Valley, and Dr. Gil Stieglitz, international consultant, and founder of ‘Principles to Live By”, helped him move forward. As well, the prayers of Emile Abadir, the Egyptian prophet, proved helpful, confirming for Ed that he would be writing a book –when it was still a dream.

Writing flows in Ed Hird’s veins. His father was the editor for many years of the Telecom Advisor, and his maternal great-grandmother, Mary McFadden-McLean, a newspaper reporter, interviewed the controversial Canadian Métis leader Louis Riel in November 1885. In the book, among other fascinating stories, is the intriguing account of how Mary disguised herself as a priest to get the interview.

Ed’s call to write began when he tragically lost his voice in 1980 through a condition called Spasmodic Dysphonia, caused by a rare viral throat infection. He took speech therapy and read over 60 books on public speaking and writing. During that period, he was interviewed by the Vancouver Sun about his faith. From that time on, he had a passion to write and speak concisely and clearly.

Ed identifies closely with Timothy, the young leader mentored by the rabbi Saul/Paul of Tarsus. The task of planting new churches across Canada with the Anglican Coalition in Canada has felt daunting, similar to the challenging task Timothy was given in Ephesus. Of some of the battles he has fought, Ed said, “Sometimes the task has been very hard, much harder than I expected. But I would never go back to ‘Egypt’”.

The cost of holding true to convictions has a price. Ed and the congregation of St. Simon’s North Vancouver, BC, were forced to leave their church building when they took a stand for the traditional definition of marriage. For the past three years they have worshipped in a school.

St. Simon’s Church North Vancouver then became part of the global Anglican Church, as distinct from the Anglican Church of Canada. “The African Church in particular is standing for the gospel”, said Ed during an interview on 100 Huntley Street.

Paul’s disciple Timothy was a type of Canada -- shy and insecure – but Rev. Ed Hird believes that the Timothys are going to capture the nation!

Battle for the Soul of Canada can be ordered at http://battleforthesoulofcanada.blogspot.com/
-Belinda Burston rediscovered a passion to write as a result of attending a writers’ conference in the year 2000. Belinda lives in Bond Head, Ontario and is married with two grown children and six grandchildren.
p.s. In order to obtain a copy of the book 'Battle for the Soul of Canada' or any of our six books in paperback or ebook on Amazon, just click on this link.