Battle for the Soul Excerpt: The Gift of the Alpha Course 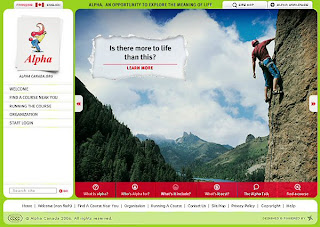 The Gift of Gentleness
-an article for the North Shore News ‘Spiritually Speaking’ column
One of the great gifts of the world-renowned Alpha Course is its gentleness. Canadians do not like to be pressurized or have the gospel shoved down their throat. Some have a great fear that somehow religious people will brainwash them and force them to do something that they do not want to do. The Alpha Course goes back to Paul’s teaching to his protege Timothy that sharing our faith needs to be gentle, kind and gracious (2 Timothy 2:25). As the past Chair/President for Alpha Canada, and the current National Alpha Chaplain, I know from first-hand experience what a gift the Alpha Course has been to so many.

Having just visited Newfoundland & the Maritimes to attend the largest Christian Ashram retreat in the world with over 800 participants, I was privileged to hear hundreds of stories from Eastern Canadians whose lives have been deeply impacted by the Alpha Course. Over the past two years, I have spoken at Christian Ashrams in Alberta and Saskatchewan , and once again I heard remarkable stories of Canadians whose lives have been decisively changed by taking an Alpha Course.

Nicky Gumbel has been strongly linked in many Canadian minds with Alpha. Nicky Gumbel was a successful lawyer in London who was convinced that the Christian faith had nothing to offer him. His impression of Christianity was that it was dreary and uninspiring. His impression of many clergy was that they reminded him of undertakers. Nicky thought that Christianity was also totally irrelevant. He couldn’t see how something that happened two thousand years ago and so many thousands of miles away could have any relevance to him in modern life.

Nicky was also convinced that the Christian faith was intellectually indefensible. At age 14, he wrote an essay in which he tried to destroy the whole of Christianity and disprove the existence of God. Nicky went through a phase when he enjoyed arguing with Christians, just for the pleasure of exposing their falsity.

Life is full of strange and unexpected turn-of-events. One of those turn-of-events was that Nicky Gumbel became so convinced of the relevance and truth of Christianity that he even became an Anglican priest. A few years before, the idea of becoming a pastor would have been the farthest thing from his mind, almost laughable. And yet it happened. A number of years later, millions of people all around the world are finding that Nicky Gumbel’s Alpha Course presentation is helping them live a more meaningful life.

All around the world, on every continent, people are taking the Alpha Course. Many are saying that this course has answered a lot of their deepest questions about life. The symbol of the Alpha Course is a person carrying a very large and heavy question mark. So often the questions of life can really weigh us down.

Josh Wilton our Newcomer Pastor recently led our 26th Alpha Course at a Deep Cove home. Seekers and unchurched people really love this safe opportunity to explore the meaning of life. Part of what makes Alpha tick is the wonderful fellowship over eleven weeks as people eat delicious meals together every Thursday night. No question is taboo at Alpha. No one is put down or criticized. Nicky Gumbel’s video presentations every week are thought-provoking and challenging. The discussion that follows after is free-wheeling and very engaging. The Holy Spirit weekend in the middle of the course is the lynchpin that holds it all together. I so much value the gentle freedom in the Spirit modeled by the Alpha Course. Conservatively, I would estimate that over 370 people so far have attended our St. Simon’s North Vancouver Alpha courses. Many other congregations on the North Shore will also be hosting an Alpha Course this coming fall. I commend Alpha http://www.alphacanada.org/ to you as a gentle gift to the people of the North Shore. For more info, you are invited to phone 778-772-5464, or e-mail stsimonsministry@gmail.com

Congratulations on your new blogsite, Rev'd Hird. I'm a big fan of yours.

I came to find Christ, myself, through an Alpha course about ten years ago. I have never looked back. I recommend it, highly, to those who still seek the truth. They will surely find it with Alpha. God Bless!

Thank you for your encouraging words, Mocrael.