North Shore News: 'Battle for the Soul of Canada' Just Out 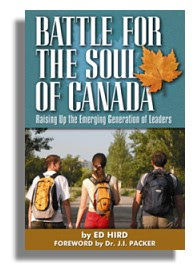 Three and a half years ago I spent a one-month sabbatical in a small cabin on top of Sumas Mountain. I was reluctant to go on this sabbatical, because I was convinced that I was too busy. The truth is that I was ‘too’ busy, and needed to get away to just be with God. I thank God for my fellow clergy who covered for me so that I could have such a mountaintop experience.

During my retreat, I met with Ron Dart, an instructor at the University of Fraser Valley College. Ron said to me that I had several books within me. He then said that it would be a sin if I didn’t write another book.

My first book was written as a social worker on ‘The Needs of Adolescents in a Pediatric Setting’. It was produced by Vancouver General Hospital and sent to over sixty hospitals around North America. Despite having written hundreds of newspaper and magazine articles over the past twenty-five years, I was unable to ‘birth' my second book. Even before Ron Dart’s encouragement, I had known for years that I was to write another book.

lmost two years ago, I received another jolt that broke through my literary procrastination. Dr. Gil Stieglitz, in the midst of a helpful coaching session, spoke powerfully about my potential book in a way that deeply connected. From that point on, I stopped waiting, and started writing my book.

The first five thousand words were the hardest part of writing my 176-page book. I carved away at my initial draft of ‘Battle for the Soul of Canada’ until it felt like there was hardly anything left.

The Good Book encourages people to seek a rebuke. So I began approaching respected colleagues, asking them to ruthlessly critique my book. The feedback was often very painful and most helpful. Nine drafts later, the book really took shape. I became so energized about the book that I once wrote 24 hours straight and did not even feel tired the next day.

To obtain detachment from my book, I put it aside and read thirty books on writing and publishing. Pierre Berton’s book on writing was hilarious and most insightful. Most of the thirty books were so depressing and cynical that I wondered why anyone would ever want to write a book.

Dr. J.I. Packer, who wrote my foreword, was a great encouragement to me during this discouraging phase. I have to say that writing this book drove me to prayer. “Lord, it doesn’t look like there is any way forward. Please help”.

Miraculously God brought along a friend Bill Glasgow who knows the publishing industry. A few months later, Friesens in Winnipeg printed 2,000 copies of my first edition. Over 1,000 have already been sold, and the 2nd printing of 5,000 copies is coming out soon.

‘Battle for the Soul of Canada’ is essentially about raising up the emerging generation of leaders in Canada. It tells the story of nine Canadian pioneers, like George Vancouver and David Thompson, who point the way to a healthy future.

Trevor Lautens, a North Shore News columnist, endorsed the book, saying “For an unbaptized, non-practising non-Christian, but with strong sympathy for and even envy of devout Christians, Rev. Hird’s book strikes me as original, provocative and appealing, with interesting details about his own path to faith.”