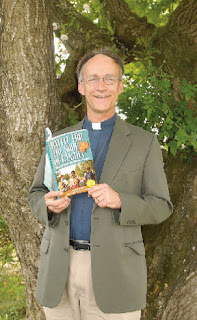 JOHN MORROW / The Abbotsford News
Rev. Ed Hird won the Word Guild Award for non-fiction in mid-June for his book Battle for the Soul of Canada. The priest began writing in the 1980s, through a spiritual column for The Abbotsford, Sumas and Matsqui News.
By KRISTINE THIESSEN
Abbotsford News
Jul 12 2007
Rev. Ed Hird’s book has a lot to say about Canada’s younger generations: They have developed an anti-marriage culture where they wed later and have difficulty staying married. They lack a vision for the future of Canada. They must not be ashamed of our Christian heritage.
Hird combined his concern with Canadian youth culture, the conviction of his faith, personal stories, and his passion for Canadian history in Battle for the Soul of Canada: Raising Up the Emerging Generation of Leaders.
In mid-June, the book won the Word Guild Award for non-fiction.
Hird says he sees a lot of Canadians struggling from discouragement and insecurity, and hopes his book helps people “grab their future.”
“Particularly, my hope is to encourage the emerging generation of leaders,” he says. “A lot of younger people have felt kind of stuck, and I want to help them move forward.”
In Battle for the Soul of Canada, Hird points to famous historical figures who shaped Canada, such as Captain George Vancouver and Louis Riel, to highlight character traits he hopes will be embodied by Canadian youth.
“May we, too, as Canadian pioneers, discover the passion of Louis Riel for our Savior Jesus Christ,” Hird writes.
He does not shy from serious, controversial issues such as sexual and physical abuse, and strengthening traditional marriages.
Five years ago, the issue of homosexual relationships led the priest to instigate a break-away faction of the Anglican Church, called the Anglican Coalition in Canada.
The ACIC split – or, “moved sideways,” says Hird – from the Anglican diocese of New Westminster when the church sanctioned the blessing of same-sex relationships.
Today, Hird and the ACiC serve under the Archbishop of Rwanda, Emmanuel Kolini.
But for all the passion and conviction involved in directing a break-away faction and writing a novel to inspire youth, Hird is soft-spoken and composed.
The 52-year-old has been a priest for 27 years now, and amid all the personal developments, he has spent the last 16 years preaching and writing on the North Shore.
However, it was in Abbotsford that the beginning of his writing career began, when from 1982 to 1987 he was an assistant priest at St. Matthew’s Church.
At the time, a few pastors and priests took turns writing a spiritual column for The Abbotsford, Sumas and Matsqui News, as The Abbotsford News was then titled.
He recalls one column in which he discussed teen suicide. A teenage girl read his column shortly after a suicide attempt, and reached out to him to talk.
“I had so much response to [the columns],” says Hird.
He continued to write for the Deep Cover Crier and North Shore News, but four years ago he began to seriously toy with the idea of writing a book.
“I went up to Mount Sumas, hung out there, and prayed,” says Hird. “I sought the Lord for direction.”
The book found its niche among others written from a Christian framework, and was recognized on June 13 at the Word Guild, a group of Christian Canadian writers and editors.
“I try to do this instinctively and reflectively,” says Hird. “I’ve been told I have several more books inside of me.”
p.s. In order to obtain a copy of the book 'Battle for the Soul of Canada', or any of our six books in paperback or ebook on Amazon, just click on this link.