Daniel Pi photo
Rev. Ed Hird is a self-confessed history buff. His book, Battle for the Soul of Canada, combines his two passions: history and the Bible. He describes it as "a bold experiment... that worked."
By Alex BrowneArts Reporter
Jul 08 2007

"It's a bold experiment," he said.
The miracle is that it worked: “ it kind of clustered together." 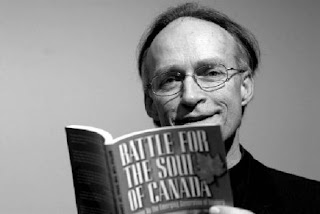 The key to the book is in its subtitle: Raising Up the Emerging Generation of Leaders. For Hird, a member of the Anglican Coalition in Canada, believes both the nation and the church is ready for spiritual leadership after decades of travelling well-intentioned detours.


But his model of a leader is not an expected one. Drawing on quotations from Timothy 1 and 2, Hird links St. Paul's protege and right-hand man, a shy yet unwavering Christian, with distinctly Canadian qualities.


"In many ways Timothy has the personality profile of Canada," he writes.
"Gentle, somewhat insecure, and easily rejected. Yet Paul saw that this unlikely individual had the potential to be a great leader, even to be the successor after Paul's assassination."


In his book Hird, also past-president and national chaplain of Alpha Canada, stresses the need to find the present day Timothys amongst us "not necessarily people of obvious and dominant leadership qualities, but those with a quiet potential to lead."
"Without a vision, as the Bible says, people perish," he said.


A self-confessed history buff, he also peppers his analysis with stories of both well and lesser-known Canadians of the past.


The book is available locally at Angel Christian Supplies, but the author also has strong Peninsula connections.


"I spend my weekends and holidays here - about 95 per cent of my family lives here now," he said. "My parents live here, my in-laws live here, my younger sister and her husband and their five children live here."


In addition, he and his wife Janice also lead the annual B.C. Christian Ashram Retreat, formerly at Camp Kwomais, which has now moved venue to Camp Alexandra.


Hird acknowledges the seeds "and the literal starting point" of the book were in the schism in the Anglican Church over the last half decade, manifest in the homosexual marriage debate.
The effect was pronounced in the case of his own congregation. Because it hewed to traditional definitions of marriage, St. Simon's found itself evicted by its diocese from the church building and property, and ended up finding a new home.


"Basically the Anglican Church has gone through some identity challenges," he said. "The homosexual issue was not central, it was symptomatic."


But Hird's intention in the book, he said, was not to surrender to 'unforgiveness' and bitterness, but to find a way forward out of catastrophe, by using the example of Timothy.
"Anglicans are looking for hope, and Canadians are, in general,"he said.


â€œStatistics show that Canadians are as spiritual today as they were 40 years ago. But it's gone into the realm of privacy. Most Canadians won't talk about spirituality in front of strangers, but they will if they're comfortable.


"Spirituality has a way of surviving through all things."
p.s. In order to obtain a copy of the book 'Battle for the Soul of Canada', or any of our six books in paperback or ebook on Amazon, just click on this link.