http://www.nsnews.com/ by Joanna Habdank, jhabdank@nsnews.com North Shore News
On June 13th, Rev. Ed Hird from North Vancouver was recognized in Ontario by his peers for his recent book "Battle for the Soul of Canada". That day he won The Word Guild award for an independently published non-fiction book. The guild is an association of Canadian writers and editors who are Christian. According to Hird, there were 231 applicants for a number of key awards, so naturally he is pleased with this feat. 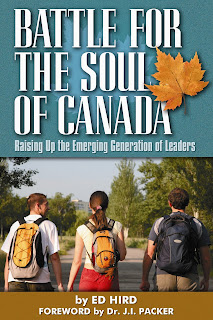 "I really feel privileged and honoured to have been chosen and I'm very thankful to the national organization The Word Guild," says Hird. "I'm also thankful for the people on the North Shore," he adds, explaining that some of those articles and chapters were previously written on the North Shore. Hird has been a regular contributor to the North Shore News' "Spiritually Speaking" section and for a smaller publication (The Deep Cove Crier) distributed in Deep Cove. Currently Hird is Rector at St. Simon's Church North Vancouver, part of the Anglican Coalition in Canada. Ordained in 1980, he's been on the North Shore since 1987, and has at one point served as the National Chairman for the Anglican Renewal Ministries of Canada. Hird says he wrote the book because it was simply inside of him and because he was encouraged by friends to put his thoughts in this volume. "The first 5,000 words were quite painful," he recalls. "Then it really started to flow. At one point, about a year and a half ago, I wrote for about 24 hours without stopping." Battle for the Soul of Canada, Raising up the Emerging Generation of Leaders works on several levels, says Hird, explaining that his primary target audience is spiritual seekers. His secondary focus is providing a guide to 'raising up Timothys' or leaders of tomorrow, based on the devotional commentary on letters of 1st and 2nd Timothy in the New Testament. "Drawing on First and Second Timothy in the Bible, I would say they are the most practical leadership manuals ever written in history. I drew on the wisdom of the two books as the framework and model for our generations," says Hird. The passages are intended to guide Generation X and Y on how they can come into their own destiny, potential and purpose, he explains. A third feature is born out of Hird's passion for Canadian history. One of the common themes is looking at people in the Canadian past and looking at them as metaphors for the future, says Hird. He includes the stories of (thirteen) Canadians, such as Louis Riel, Simon Fraser, and Sir Alexander Mackenzie. So far, more than 1,400 copies of the book have been sold, says Hird, and it's now gone into its second printing. He's also been on five national TV programs, and BC Christian News has asked him to write an article about the award-winning writer Rudy Wiebe. He stresses tha the message is directed towards both Anglicans and people of different faith. "Whether people are Christian, Jewish or Muslim, they all believe in what we call Judeo-Christian values, like the Ten Commandments...and I believe that Canada's legal system...and its education and political system were profoundly shaped by interaction with Judeo-Christian values." Therefore, in the book, he looks at people who would symbolize our heritage, and how society can reclaim it in terms of shaping the future, and in giving hope for the future, says Hird.
p.s. In order to obtain a copy of the book 'Battle for the Soul of Canada', or any of our six books in paperback or ebook on Amazon, just click on this link.