How to Raise Up a Generation of Leaders (Richmond News) 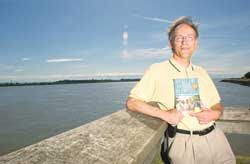 Ed Hird, a pastor who has spoken at the English service at Richmond Emmanuel Church, is the author of Battle for the Soul of Canada: Raising Up the Emerging Generation of Leaders. Technically, the book took Hird two and a half years to write, but in reality it is the culmination of 25 years of working with youth through the church and other institutions, such as Burnaby's New Haven Correctional Centre. In the book, Hird tells the stories of remarkable Canadian pioneers with the hope of inspiring today's youth take up the leadership torch.


Ed Hird believes he knows the key to raising leaders.


He has written a book titled Battle for the Soul of Canada: Raising Up the Emerging Generation of Leaders, in which he proposes that the answers lie in our past.


"If you look at our history and the great leaders that helped shape this nation of ours, they all had a couple of things in common; they all shared similar values, not necessarily religious values, and perseverance," says Hird.


Drawing on nearly three decades of religious work in such places as Burnaby's New Haven Correctional Centre (where he was a social worker dealing with troubled youth), Woodlands School (a residential school for mentally and physically disabled people) and the Downtown Eastside, Hird outlines a spiritual path we can embark on to raise the thinkers and the movers of tomorrow.


Although the book is written with a religious undertone - every chapter starts out with a biblical passage by Timothy (In the bible the Apostle Paul wrote to Timothy, a young pastor, to encourage him in his church work) - Hird says one doesn't have to be religious to get the gist of what he is trying to convey.


"I don't preach in the book. You don't have to attend church to read my book, it's written for those who are hungry for a purpose in life," explains Hird. "I tell the story of nine key Canadian pioneers who have impacted and shaped our country. Their stories, I believe, can inspire and drive our young people to build better futures."


Hird unlocks snippets of wisdom from Canada's heroes such as Frederick Seymour - the forgotten first governor of the United British Columbia colony. The scenic Mount Seymour in the North Shore is named after him. He is credited with establishing the B.C. public school system, improving the courts, drawing up public health regulations, setting standards for mining and reducing the provincial debt. (Governor from 1864-1869).


Hird also devotes a chapter on explorer and trader Alexander Mackenzie, who crossed North America by land in 1793.
"He had bull-dog persistence, inexhaustible energy and insatiable curiosity," adds Hird.
By telling their inspirational stories, Hird strongly believes our young people will be moved to act and live according to their talents.


The author believes one of the impediments to this happening is that the generation Xers suffer from an identity crisis caused by living in the shadow of the affluent baby boomers.


"We need to invest in our youth and promote them," explains Hird. "We need to walk hand-in-hand with the generation X and the millennial generation (born between 1977 and 1994).... We need to root for them, cheer for them and money won't do it, we need to invest time.
"We need to tell our young people that pioneers had it tough and they need to know it's not easy in life, but that they can make it."


The 52-year-old father of three grown sons took nearly three years to research and write the book.
"In the strictest sense of the word it took me about two-and-a-half years, but in the broader sense it's been in the making for 25 years."


Hird is no stranger to writing - he has penned more than 250 articles for a number of different publications, including theNews' sister paper the North Shore News.


His talent for writing is in his genes, says Hird.
"My great-grandmother, Mary Mclean, was the first Canadian female reporter with the Regina Leader."
In his chapter on The Passion of Louis Riel - a Metis leader who was hanged for treason for his resistance against the Canadian government - he tells of how his great-grandmother disguised herself as a Catholic priest in order to interview Riel in jail.


"I have her passion for writing and her determination to tell a good story," Hird says. He adds that turning 50 was a defining moment for him because hitting that milestone propelled him to put pen to paper.


"It's part of us baby boomers' transition, our destiny to try new things,' explains Hird, who won The Word Guild Canadian Writing Awards 2007.


Another reason for the book is to make sure Canada's greatest leaders are not forgotten. Hird, who was ordained as a pastor in 1980, feels strongly that we Canadians "live in the shadow of the United States and our story needs to be told."


"Canada has a great history, our great leaders and explorers can inspire us and they are a symbol of our great nation," says Hird.


Hird is a walking encyclopedia of Canadiana facts. He is fascinated by our rich past.


"Did you know our first newspaper and hospital in B.C. were francophone?" questions the self-professed history buff.


Interspersed with interesting vignettes and his own spiritual thoughts, Hird takes his readers on a literary journey through our history.